Map of Divisions in Uttar Pradesh 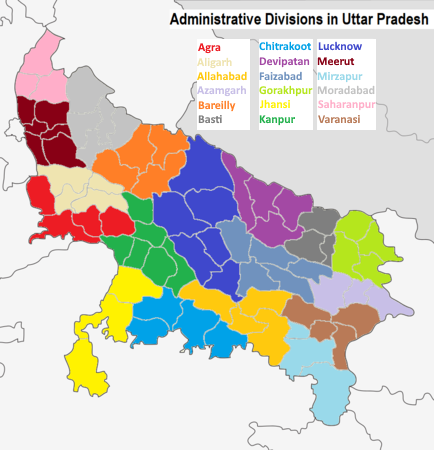 In Uttar Pradesh, collector monitors a district and they also known as a District Magistrate or DM is District Magistrate is appointed by the Government of Uttar Pradesh. They are officer from IAS, some time PCS also become but first they promoted then only, sub division is under control of SDM and than block by BDO and Tehsil by Tehsildar or Naib Tehsil dar.

Police law and order of a district is handle by DSP/SP/SSP according to the situation of district, they heads the District Police organization of the state police as per the Police Act of 1861. A Sub division Police is under every sub division. The sub division Police is headed by a Police officer of the rank of Assistant Superintendent of Police or DSP (Deputy Superintendent of Police).

These districts level officers are under the divisional commissnor and secretaries, they are under the respective ministers or governor