During the early hours of Sunday, May 8, the potent system based in the Bay of Bengal intensified into a Cyclonic Storm, effectively transforming into Cyclone Asani. From here on, it is expected to gather more strength and evolve further in the next 24 hours.
Current Wind Speed 50 knots / 58 MPH 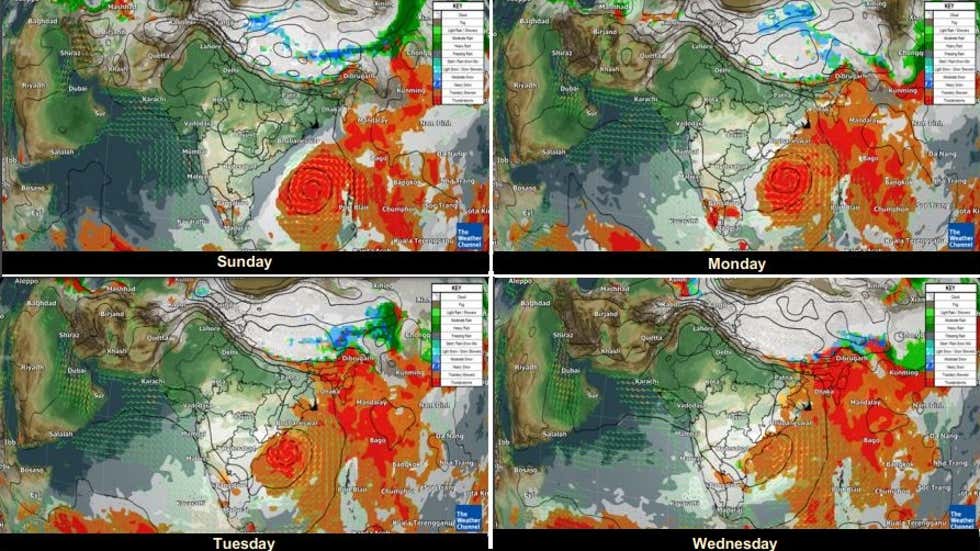 A rapid intensification
The transformation of this system into a cyclone occurred much earlier than previously expected. Initial predictions had indicated that the deep depression would not strengthen into a Cyclonic Storm until the evening hours of Sunday.

However, as per the India Meteorological Department’s (IMD) latest update, the cyclone had already formed sometime around 2:30 am on Sunday.

Furthermore, as of 5:30 am, it was located over southeast Bay of Bengal — about 450 km west-northwest of Car Nicobar (Nicobar Islands), 380 km west of Port Blair (Andaman Islands), 970 km southeast of Visakhapatnam (Andhra Pradesh) and 1030 km south-southeast of Puri (Odisha).

From here on, the system will continue to move northwestwards, and gradually intensify into a Severe Cyclonic Storm over east-central Bay of Bengal by the early hours of Monday, May 9. This is when the system is expected to be at its strongest, as it may pack wind speeds up to 60 knots (111 km per hour).

Landfall unlikely over Odisha, Andhra Pradesh
According to IMD Director-General Mrutyunjay Mohapatra, the aforementioned recurving of the system in the northeastern direction may end up sparing the states of Odisha and Andhra Pradesh from the possibility of a cyclone landfall.

In fact, he has opined that this movement may result in Cyclone Asani moving parallel to India’s eastern coast.

The Weather Channel’s met team has added that while this parallel movement continues, the system may start losing steam by Wednesday night or Thursday morning, and begin its gradual deintensification process.

The sea conditions will remain rough throughout, and therefore, the fisherfolk have been advised not to venture into the waters, especially in central Bay of Bengal from May 9-10 and northwest Bay of Bengal from May 10-12.
Source- https://weather.com/en-IN/india/news/news/2022-05-08-cyclone-asani-to-intensify-into-severe-cyclonic-storm-on-may-9